AN UNCOMMON SCHOOL – THE UNIVERSITY OF SUCCESS

In his speech “Stop Negative Thinking and Believe in Yourself,” famed motivational speaker Les Brown tells of the life-changing impact on him caused by reading just one passage in The University of Success by Og Mandino:

“I was reading the book by Og Mandino called The University of Success. Read one line, gave me a chill. He said ‘Many of us never realize our greatness because we become sidetracked by secondary activity. We spread ourselves too thin. Don’t know how to say no, and we find ourselves doing all kinds of things and never ever have time to do those things that we need to do to work on ourselves – and then there goes a second, there goes another second, there goes another second, and we can’t stop it the whole time. And before you know it, you wake up one day and you’re behind in your dreams and your bills.’ “

Of course, after he recovered from the mental and emotional “jolt” of that passage, Les Brown did go back to read the rest of that book. Rather, he enrolled as a student in that classic, uncommon school – the University of Success.

The tuition he paid was time – the time he spent there during ten “semesters,” attending “lectures,“ taking notes, and learning from the university’s fifty “professors.“

In his speech, Les Brown invites those who dream of being successful in life to wake up and enroll in The University of Success, whose campus is the space between the covers of a book. 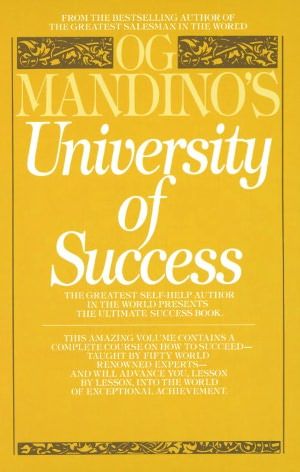