The mood was festive and joyous, yet bittersweet, at the unveiling of the Honorary DAN O’DONNELL Way at the corner of Armitage and Bissell streets in Chicago on Saturday, July 10, 2021.

Tears and smiles shone intermittently on the faces of family, friends, neighbors, and celebrities in attendance as – one by one the speakers – including Dan’s sons Brian and Kevin, Dan’s wife Kathleen, Dan’s son-in-law Andy Clark, the Consul General of Ireland, Kevin Byrne, Alderman Michele Smith, and Ron Roenigk, owner/ publisher of Inside Publications representing the Kiwanis Club of Lake View – extolled the extraordinary mixture of qualities that made up who Dan O‘Donnell was: a giver with the largest of hearts who had only to see a need to fill it, not waiting to be asked; a pater familias who not only took care of his family but delighted grandly in them – especially in the children whom he regularly treated to the “Eiffel Tower,” that four scoop jumbo ice cream creation at Margie’s Candies; a businessman who led the neighborhood to prosperity when it was threatened with blight and gang violence; a storyteller ever ready to draw an enthralling vignette from his deep story bag of experiences; and a civic leader whose involvement with not-for-profits, churches and other people serving agencies ranged beyond the neighborhood to include children at risk in Chicago’s Englewood and Logan Square neighborhoods served by The Freadom®️ Road Foundation, and thousands of exchange students from Ireland who called Dan’s store on Armitage and Bissell their home and secure base in America when they visited.

The event was planned by Dan’s daughter Erin O’Donnell Clark. It included a feast of goodies, drinks, and bag pipes played so stirringly by Thomas Johnson and Steve Moore. 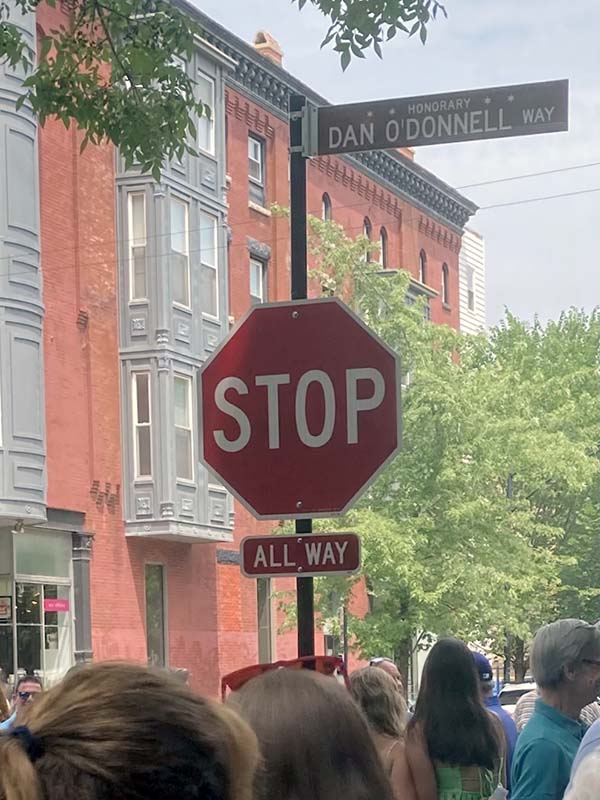